Top-level eventing rider Tamra Smith’s steady drive and ambition to excel in the sport is what first stood out to Premier Equestrian. With over twenty-five years of equestrian experience, Smith’s list of accomplishments include being named to the United States Developing Rider List multiple times, being the seventh Ranked Lady Rider of the Year in the United States Eventing Association (USEA) in 2015, and tenth Ranked Lady Rider in 2014. She was the Area VI Rider of the Year for two consecutive years, and works tirelessly towards her long-term goal of representing the United States in the Olympics, World Equestrian Games, or Pan American Games. Smith was also awarded a U.S. Olympic grant to compete on the Nations Cup teams at the Boekelo CCI3* in the Netherlands, and she contributed to the U.S. team Gold medal at the 2014 Jaguar Land Rover Bromont CCI*** in Quebec, Canada. Additionally, Smith was the first national level recipient of the USEA Foundation’s Rebecca Broussard Developing International Rider Grant, which she put toward dressage training from Olympic Grand Prix rider Peters, also a Premier Equestrian. In 2015, Smith was awarded the Rebecca Chaney Broussard Developing International Rider Grant at the international level receiving $30,000.

Smith first became familiar with Premier Equestrian arena footing while teaching a clinic at Lynnleigh Farm in Sandy, Utah. Smith said, “I was very impressed with the footing and how well the horses jumped off the ground and landed.” At Smith’s home facility, Next Level Eventing in Temecula, California, she will soon be training on the new Premier Equestrian ProTex footing.

Premier Equestrian’s premium-grade footing additive, ProTex mimics a sod arena surface when mixed with sand, providing the most desirable riding surface. The product, as with all Premier Equestrian products, is personally developed and thoroughly tested to assure consistency and quality. Smith’s new ProTex arena surface will provide her horses with the ideal levels of support, cupping, rebound, grip and traction that is needed for a high performance eventer.

“I’m so excited about being part of the Premier Equestrian team,” Smith stated. “I am very particular about the companies I choose to team up with, and Premier Equestrian is one that has the same philosophy as I do. They give back to equestrian sports and are a team that works hard and believes in excellent horsemanship.” 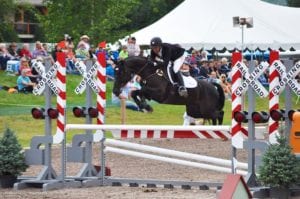 Premier Equestrian is proud to recognize Smith for her outstanding list of accomplishments and her drive to further her eventing career. The company takes pride in recognizing and sponsoring riders who are not only competitive, but also exhibit outstanding sportsmanship and horsemanship throughout high-level competition.